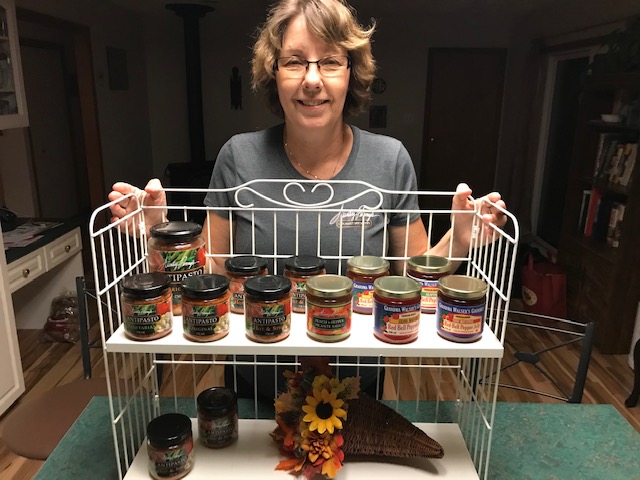 Aunty Penny’s Gourmet Specialities offers folks on Vancouver Island and in the Lower Mainland a range of products, from peach and pepper picante to Bengali chutney. By far, the best seller is the antipasto, a tomato-based spread made with vegetables and eaten on crackers. “It is a handy appetizer to have around if you have unexpected guests,” says Sharon Ryper, who co-owns the business with her husband Dan Chaisson. “It is also very nice to have along if you are on a picnic, at the beach, or camping. Also, a great hostess gift!”

In 2015, one month after selling her previous business and just a day after a conversation with her husband about getting back to work, Sharon received a phone call from the former owner of Auntie Penny’s asking if Sharon was still interested in buying the business. The two had known each other for some time and had discussed the sale of Aunty Penny’s a few years earlier, but now Sharon felt the timing was right, “I missed the people and connections.”

“My previous job was selling product and distributing it,” says Sharon. Even with  28 years of experience as a meat and cheese supplier, Sharon still had plenty to learn about food processing. “I had never done a business like this. I did not know about organizing productions, ordering product, ordering jars, dealing with labels, all that was foreign to me. I had to figure it out based on trial and error.”

“I usually go in headfirst,” says Sharon of taking over the business. “I am always asking people questions and that is how to get a lot of information.”

Asking good questions, along with trial and error, led to efficiencies and innovations in the production process. The recipes, however, remain the same as part of Sharon’s commitment to the previous owner, who developed the recipes.

“She still pays attention.” Sharon keeps in touch with the original Aunty Penny. When Sharon updated the labels after purchasing the business, she heard positive feedback from the previous owner. “After we finished designing the new one, she came to me and said, I really like what you did with the label. I was really happy about that.”

This close community connection is also reflected in the products’ production and ingredients. The picante and chutney benefit from being made in smaller batches in smaller, local commercial kitchens while, due to the higher-volume demand, the antipasto is made and jarred in a local facility. Sharon also makes every effort to source ingredients from either Victoria or more locally in Nanaimo.

Although Sharon mentions that word of mouth is how many people find out about the products, in 2018 she participated in a program run by Island Good. The program’s initiatives promote shopping and eating locally made and harvested foods and identified Aunty Penny’s products on grocery store shelves as made on Vancouver Island. Sharon mentioned that since buying the business, there have been a number of local initiatives and press with whom she has made contacts to further promote the products. For the most part, Sharon says people continue to buy Aunty Penny’s products because have tried them and think they taste delicious. This deliciousness led Sharon to learn her most valuable lesson.

“Running out of antipasto – that’s not good for business,” Sharon jokes.

The demand for antipasto is something Sharon has been able to count on. Juggling shortages from suppliers and increased demand has led the antipasto to sell out the last two Christmases, over the volume they sold in previous years. Each year, since Sharon’s phone call with the original Aunty Penny, demand for products has increased steadily.

“I feel proud that I did not let ‘stuff’ hold me back,” Sharon recalls of deciding to take over the business, despite many aspects of it being unknown to her. “I am proud of the fact that I was not afraid to try.”